For the past 10 years Phil Function has been calling Swanton Welding in Wauseon, Ohio home. When asked what kept him at Swanton for so many years, Phil doesn’t hesitate to mention the personnel who have been good to him since day one. When he first started, he thought he knew how to weld, but has learned many skills from fellow employees and mentors who helped him expand his knowledge to become a well-rounded welder and fabricator. 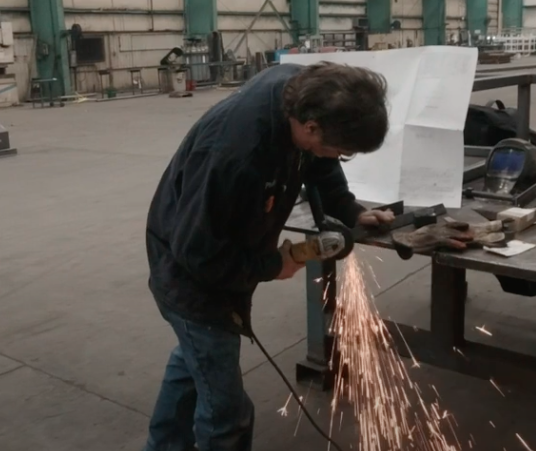 Phil keeps up to date on his many welding certifications, including completing special classes led by Nick Nijakowski, the CWI at Swanton Welding.

When not at Swanton, Phil enjoys mud bogging in his Jeep with his best friend who also happens to be his brother. Together, they seek out various mud bogs in the area to test out, including a popular spot known as the Perkins Mud Bog. He also enjoys whatever the day brings, whether that’s working on trucks or riding his motorcycle when the weather allows it.

Phil is a dedicated family man who lights up when asked about his six grandchildren. A father of two, Phil has two kids, a son who passed away two years ago, and his oldest-a daughter. Phil gets his son’s two children, a five-year-old granddaughter and three-year-old grandson every other weekend, or sometimes every week. He lovingly refers to them as a handful, as they play Barbies or ride their toy motorcycles outside.

One of the unique projects Phil is currently working on is an Ajax Furnace. To perform his welds, Phil must climb in and out of the furnace each day. There isn’t much this dedicated family man can’t handle as he fabricates, welds, and sometimes runs rolls. He describes his daily job duties as building, welding, then starting on the next step.

At Swanton Welding, we take pride in our team, and we are so thankful to have such hardworking, dedicated employees. Our people are the backbone of our company, and we couldn’t provide the exceptional service we do without them.