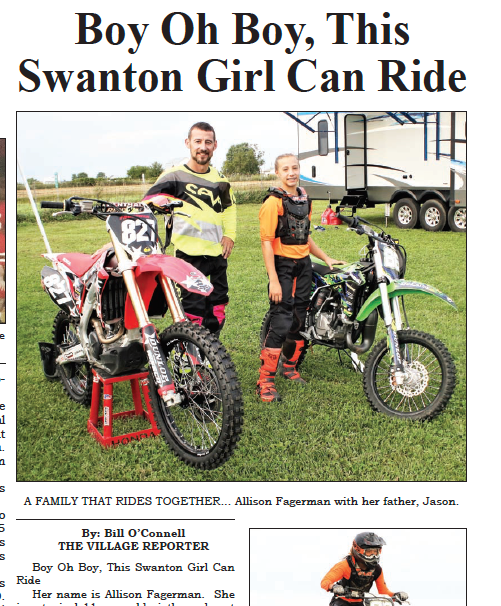 When you think of the dirty and mud-covered hills of the motocross sport, you can typically see riders competing and doing stunts wearing helmets. You may think that it’s only boys in this sport but there is a bright blonde ponytail under the helmet of one rider from Swanton.

Allison Fagerman, competes locally around the Northwest Ohio area, and was featured recently in a local publication with her dad, Swanton Welding employee Jason Fagerman talking about why she rides and some of the training she does with her father. Jason is a shop supervisor at Swanton Welding’s Heavy Fabrication facility in Wauseon, Ohio.

Jason has been teaching Allison how to perform the required maintenance on her bikes and she has recently graduated from 50cc’s to an 85cc engine. He thinks that she might be able to move up to a 125cc or 250cc next year.

She often completes at a higher age level, frequently against boys, rather than other girls. She’s ridden her way to enough awards and trophies, that she’s proven time and again, Allison Fagerman is the rider to watch.

At Swanton Welding we’re #TeamAllison, and wish her luck in her next race. Check out the entire article in the September 12th edition of the Village Reporter.