The word TEAM is often looked at as an acronym for the phrase Together Everyone Achieves More. These words ring true when it comes to the Black Swamp Football Player Award and the 2020 Ironman of the Year award recipient. A collaborative effort between Black Swamp Football, Swanton Welding, and artist, Kevin Cousin, created a trophy for Columbus Grove football player Ezra Jones that perfectly personifies the excellence of the award. 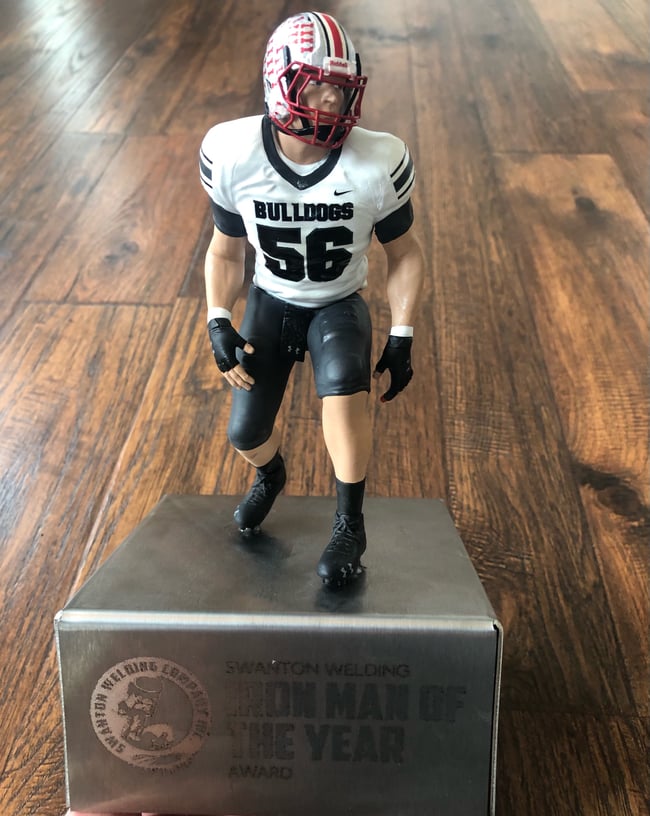 Ironman of the Year

An ironman is considered an exceptionally strong person with incredible stamina. That's exactly how those who know Ezra Jones would describe him. Ezra, a senior Columbus Grove defensive end/linebacker, works as hard on the football field as off. And his efforts have not gone unnoticed. Jones was named Ironman of the Year by Black Swamp Football.

The Ironman Award goes to the high school football player that exhibits an extreme habit of working. Jones led his team with 86 tackles in 2020 while tying for a team-best with five sacks. But he didn't accomplish it without hard work. While school facilities were shut down due to the COVID-19 pandemic, Ezra organized his teammates and created a daily workout plan so they were ready when they were finally allowed to return to the field.

"The award signifies an individual that is a tireless worker and is a selfless teammate that will go above and beyond to help his team," said Lynn Groll of Black Swamp Football. "This past year's winner, Ezra Jones of Columbus Grove High School, is a perfect representative of what the Swanton Welding Ironman Award entails. Ezra is one of the hardest-working student-athletes I've ever met."

An amazing ironman deserves an equally amazing trophy in his own likeness. Artist Kevin Cousin provided his talent to bring it to life.

Kevin spent hours poring over action photos of Ezra in his Bulldog's uniform.

"A couple of details stood out immediately including the fingerless gloves, the sleeves coming out of the jersey, and the scar on Ezra’s left arm," said Kevin. "With these notes in hand, I worked with my modeler to get all of these details in place. Once the files were constructed, the model was printed using liquid resin on an SLA printer."

The last step was adding the color and all of the detail. The helmet, jersey, eye color, and cleats were some of the many finite elements added to this piece of artwork to truly make it an accurate replica of Ezra Jones.

The sculpture was then mounted to a custom base fabricated and laser etched by the skilled team at Swanton Welding.

High school athletics help students develop physically, socially, and academically.  Recognitions like Black Swamp Football’s Ironman of the Year award give student-athletes the opportunity to be recognized for outstanding effort. This is why it was a no-brainer when Swanton Welding Company was asked to team up and sponsor the award.

"Black Swamp does an outstanding job recognizing our local high school and college players and programs," said Swanton Welding President Norman E. Zeiter. "Ezra is a true example of an Ironman who displayed leadership and toughness on the field, and Swanton Welding is proud to support his efforts and leadership. Northwest Ohio has a rich tradition of excellent high school football, tough kids, and players who are team first guys. We appreciate the opportunity to recognize these players."

"We at Black Swamp Football cannot thank Swanton Welding enough for their support. Norm Zeiter Jr. and his crew at SWC are major supporters of student-athletes in northwest Ohio," said Groll.

Swanton Welding is pleased for the opportunity to continue to support local high school athletics. We look forward to working with Black Swamp football for many years to come.